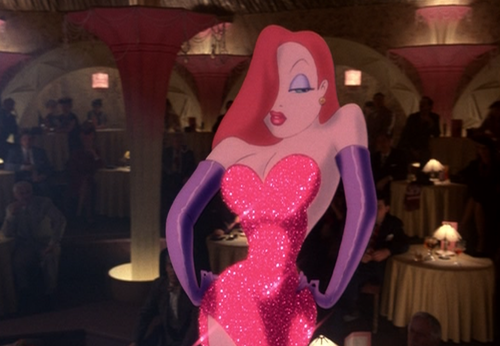 source: we heart it

Her sultry voice is infamous. Her hair shines almost as brightly as her dress. Her physique makes even Barbie look balanced. But that doesn’t mean she’s bad.

The 1988 comedy, “Who Framed Roger Rabbit” (based on the book “Who Censored Roger Rabbit?”), tells the story of Detective Eddie Valiant as he tries to clear the name of Roger Rabbit, a buffoonish “toon.” Valiant was approached to take on the case by Jessica Rabbit, Roger Rabbit’s coveted wife. As a “toon” herself, Jessica was drawn to be the ultimate heterosexual man’s fantasy. Needless to say, she’s out of Roger Rabbit’s league, or at least that’s what the other characters assume. In fact, a lot of presumptions are made about Jessica’s reputation. How could a woman like her be happily married to a guy like Roger Rabbit?

But Jessica Rabbit sets the record straight. In her infamous scene with Eddie Valiant, she shares that physical traits aren’t indicative of a person’s personality. She says, “I’m not bad. I’m just drawn that way.” Jessica Rabbit only appears to be “bad” because such a sexual-looking woman is bound to be promiscuous. And this is, of course, a bad thing. But what’s wrong with a woman being sexual? What’s wrong with a sex icon being married to a rabbit? Why do we care so much about a woman’s sexuality?

Some have argued that Jessica’s infamous line enforces the ideal of feminine passivity. Some have even blamed the film itself for portraying Jessica as the manifestation of the male gaze. But that’s the whole point of her character – the film wanted to point out that appearances can be deceiving and assumptions can be wrong. The film didn’t design Jessica Rabbit in order to bring in a male audience; the film wanted to prove a point. However, Kathleen Turner, the actress who voiced Jessica Rabbit, was originally uncredited. Apparently, Turner took on the role as a favor to the director, Robert Zemeckis. Even if this is true, Turner’s lack of credit takes away some of the power of Jessica’s words.

Check out the video below for Jessica’s infamous line: